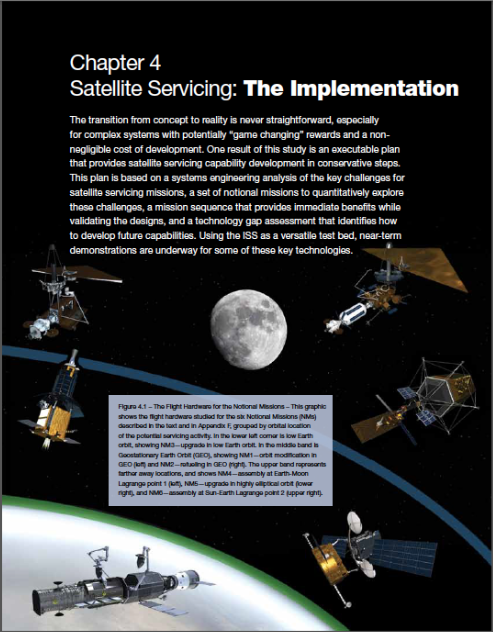 The NASA On-Orbit Satellite Servicing Study, mandated by Congress and supported by the NASA Advisory Council (NAC), investigates what our future may hold in the area of satellite servicing. It was conducted from 2009-2010.

An internal Project Report captures the work performed under the congressional mandate.

The Study revealed that viable plans can be put into place to develop a meaningful on-orbit satellite servicing capability. Such a capability would allow America to achieve key milestones in space using today's technology as well as current and projected launch systems.

The study incorporated the results from the following major activities:

1. A 2009 industry-wide Request for Information, released to notify the satellite servicing community of an opportunity for discussion

2. The International Workshop on On-Orbit Satellite Servicing, conducted to engage the community

3. An examination of "notional missions" to bracket the trades involved for possible servicing customers (available within the Project Report)

5. Developing and validating ground simulator and test bed capabilities that can be used to verify satellite servicing flight hardware and software