The RRM tools perform servicing and refueling tasks in the harsh environment of space—robotically by remote control. 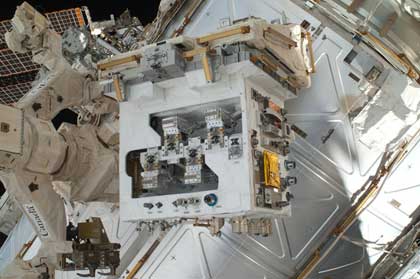 The RRM module shows off its four tools, safely stowed in storage bays at the front of the box. The Dextre robot uses these tools to demonstrate a wide range of satellite-servicing tasks on the RRM module. 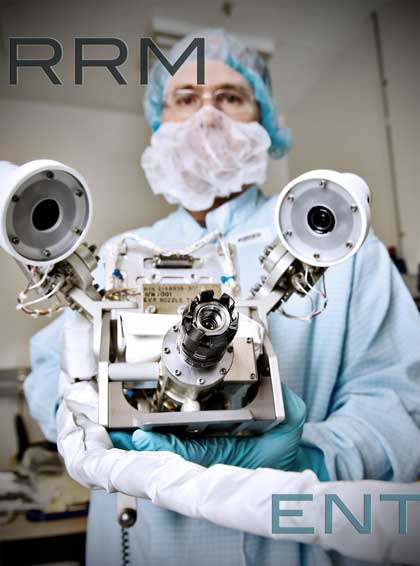 An RRM tool engineer displays the Nozzle Tool which was developed in the Goddard Satellite Servicing Center. Hundreds of tests in this facility helped to perfect each tool.


How They Got To Space

Safely nested in four storage bays in the RRM module. RRM launched to the International Space Station on STS-135, the last shuttle flight.

The more a single tool can multitask, the fewer heavy tools need to be carried to space. Fewer tools also mean more room to carry other cargo and less cost for mission operators.

Each robotic tool was therefore manufactured for maximum efficiency and functionality in space.

Innovation springs best from a challenge and a strong foundation. The RRM team had to work within four unchangeable constraints: an 18-month deadline, the static design of the Dextre robot (already in orbit), tough astronaut proximity safety requirements, and finally the fixed design of the satellite pieces with which the tools work.

The team met these challenges by heavily leveraging the twenty years of experience they gained building astronaut tools for the five Hubble Servicing Missions. In-depth understanding of servicing complexities and innovative thinking helped to transfer this knowledge into the four robotic RRM tools.

RRM tool designers followed the same mantra that defined the work they did for Hubble Space Telescope Servicing Missions: put the "smarts" in the tools. Dextre will use the RRM tools to demonstrate six unique servicing tasks over two years of operation.

"Smart" tools are functional, useable and precise. They are designed to preclude potential missteps from becoming mistakes.

The tools work seamlessly between the end of the International Space Station Dextre robot and the multiple pieces of satellite hardware that the tools cut, manipulate, retrieve, and unscrew. All of the tools have two integral cameras with built-in LEDs—features that give mission controllers a set of eyes and a flashlight as they direct RRM activities. Visual cues on the tools' exteriors give controllers another way to keep track of a tool's position. All RRM tools also have built-in fault tolerance to help ensure mission success.

The Wire Cutter Tool's precision and fine-grabbing capabilities allow it to both snip tiny wires and safely move aside delicate thermal blankets. A spade bit on the tool's tip can slice blanket tape. Its parallel jaw grippers are able to grab a satellite's appendages. 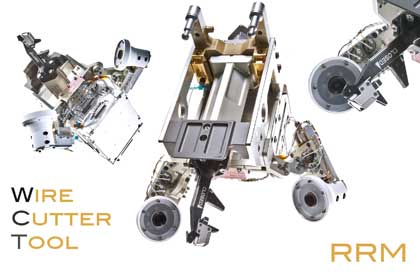 The Wire Cutter Tool has a functionality of four: it grabs, it snips, it manipulates, and it slices.

The Multifunction Tool lives up to its name by effectively doing the work of four tools. It connects with four unique adapters to capture and remove three distinct caps and remove one gas "plug" on the RRM module. 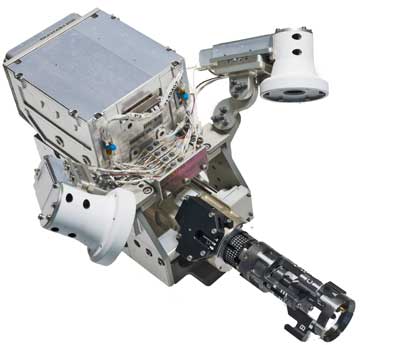 The Safety Cap Tool removes and stows a typical fuel-valve safety cap and its seal. Small adapters allow it to also manipulate screws and remove caps on the RRM module. 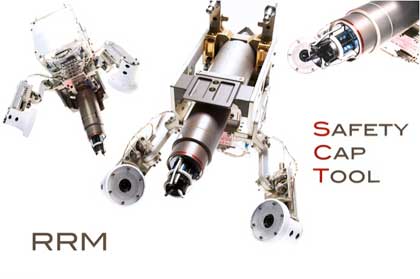 From the top, bottom, and to the side: the RRM Safety Cap Tool is shown at a variety of angles. Each RRM tool's lobster-like appearance comes from the two integral cameras with built-in LEDs, which image and illuminate the tool's work during mission operations.

The Nozzle Tool connects to, opens and ultimately closes a satellite fuel valve. Using an attached hose, it transfers a representative satellite fuel in a continuous loop to simulate the refueling of a satellite. The Nozzle Tool has an anti-cross-threading feature that ensures it cannot damage the satellite fuel valve by screwing the fuel cap on the wrong way. The fuel cap that the tool leaves behind has a "quick disconnect" fitting that gives operators easy future access to the valve, should it be needed.