Screws Fastened No More Thanks to RRM Tool

May 3, 2013 - With SMA caps and the adapter that captured them now stowed, the Safety Cap Tool was ready to use another adapter that would essentially turn the tool into a robotic screwdriver.

With the Torque Set Adapter in place, robot operators carefully aligned the tip of the tool and unscrewed fasteners located on a worksite attached to the module. But there are no free-flying screws here! The small cage over one of the fasteners is designed with an opening just large enough for the tool tip, but small enough to prevent a screw from floating away— the same basic mechanism used by the astronauts during the Hubble Servicing Mission in 2009. The other fastener, with a stopper at the tip, was secured from within, allowing operators to practice the same task without the support and guidance of the cage.

With two tasks successfully completed two days into operations, it's time for the Safety Cap Tool to take a bow and open the stage for the next tool to complete its task! Next, Dextre will pick up the Wire Cutter Tool for the careful unwrapping and securing of thermal blanketing.

Even for humans on gravity-bound Earth, tiny screws can be difficult to handle. Aligning a screwdriver bit onto fastener heads takes a certain amount of trial and operator "feel." Screws have an annoying propensity to twist and leap out of frustrated fingers once they are free. Released screws seem to hide in the most unreachable places. And that's just on the ground.

Add in a zero-gravity space environment, a robot mechanic, and a mandate for extreme cleanliness to the mix, and you have a NASA-sized challenge to unravel.

It may sound daunting, but for the Robotic Refueling Mission (RRM) team - chartered to develop the tools, technologies and techniques to execute robotic satellite servicing in space -it's just another exciting day on the job. Figuring out how a robotic mechanic could safely unscrew and stow such tiny fasteners could open up a new world of servicing possibilities, giving hypothetical servicers a way to access and upgrade satellite components enclosed by screwed-in cover plates. Unraveling satellite-servicing problems and practicing the solutions is exactly what RRM was placed on the International Space Station (ISS) to do. 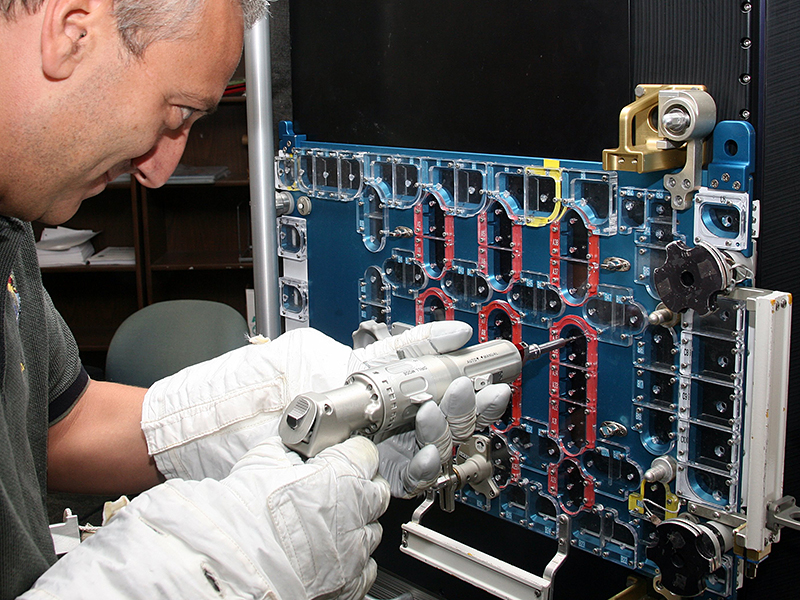 The RRM team derived inspiration from the STIS Fastener Capture Plate they developed for the 2009 Hubble Servicing Mission 4. Here, mission astronaut Mike Massimino uses the plate during a practice session.

How RRM Will Do It

Here's how RRM is overcoming each one of the task's unique challenges during the March 2013 RRM operations:

A hypothetical servicer of the future would need the right tool for the job. With an eye to maximize efficiency, the RRM team built the Safety Cap Tool (SCT) to do more than just remove caps. A special adapter turns the device into a space power screwdriver, allowing it to remove satellite screws pre-fastened into the RRM practice module task boards.

The tool would need to be perfectly aligned over each screw. When Dextre locks into an RRM tool and moves it towards a task board, operators get a front-seat view of the worksite thanks to the two LED-lit cameras that are a part of each tool. These eyes give operators the information they need to align Dextre, the SCT, and the adapter's tool bit into the right position to unscrew each fastener. The robotic operators, or ROBOS, at Johnson Space Center spent time training with the RRM team at Goddard so each procedure and potential anomalies are understood well in advance.

The screws would need to be trapped after release. A clever cage fixed over the RRM worksite has holes large enough for the SCT screwdriver bit to enter, yet small enough to trap released screws so they do not float away. The cage was inspired and adapted from the technology the team developed for the STIS Fastener Capture Plate, a specially crafted device that allowed astronaut Mike Massimino to remove and safely stow 111 individual screws on the Hubble Space Telescope Servicing Mission 4.