Satellite servicing allows satellites to work longer in space. Every year, functional satellites providing weather data, communications and other essential services are retired because they reach the end of their fuel supply. As old or ailing satellites are moved to the "graveyard orbit," replacement models are financed, designed, built and launched—a process that can be costly and time consuming for satellite owners and the consumers.

As worldwide demand grows for satellite-provided communication and data products, NASA is using RRM to demonstrate the robotic technologies needed to keep satellites working longer in space. Through RRM, NASA is proving the reliability of its robotic servicing technologies, eliminating potential issues through on-orbit testing, and bolstering the foundation for future robotic servicing missions.

What Does It Take to Refuel a Satellite in Space?

Refueling a satellite in space. From what we know about filling up our cars here on the ground, it sounds pretty simple, right? Just open up the cap, connect the fuel nozzle to fuel the tank, and send the satellite on its way? Like many things in space, it's much more complicated than you would think.

First, the fuel valves of the satellites in space today were never designed to be accessed after launch. To prevent hazardous fuel from escaping during launch and operations, satellite manufacturers tightly lock down the fuel valve with wired-shut caps. These caps must be removed before anyone can access the valve.

Finally, to make the challenge even more complex, the majority of the satellites that would benefit most from servicing are in geosynchronous Earth orbit, or GEO. GEO is inaccessible to humans at this time, which means that only robots can do the job.

Robotic satellite refueling presents an ambitious but achievable list of tasks—especially since the satellites in geosynchronous Earth orbit were never designed to be serviced in space. Using the high-tech "test bed" of the International Space Station, RRM is demonstrating the tools, technologies, and techniques that would get the job done.

During the refueling task, NASA and CSA operators on the ground direct the Dextre to pick up four RRM tools to complete the demo. The entirely remote-controlled Dextre uses these tools to:

Individual pieces of hardware show the seals that typical satellite fuel valves have. To the left is a tertiary cap with "lock wire" visible underneath; in the center is a safety cap/actuation nut with securing lock wire. An exposed fuel valve is shown to the right.

The Refueling Task, Play by Play

Click on the images below for a larger view

Operations begin with Dextre picking the Wire Cutter Tool with one robotic arm and the Multifunction tool with the other. First, Dextre and the RRM Wire Cutter Tool cut the wire that keeps a "tertiary cap" screwed on tightly over the fuel valve.

A tertiary cap is the outermost layer of protection on many fuel valves. Just like on a real satellite, the tertiary cap is secured with two twisted lock wires each a mere 20 thousandths of an inch in diameter—about the thickness of two sheets of paper. Lock wire is used to make sure that caps stay in place during the the random vibrations that occur while the satellites launches to orbit. NASA has to cut through this wire before it can remove the tertiary cap to gain access the valve.

With the wire now cut, Dextre uses the Multifunction Tool and an accompanying adapter to remove the tertiary cap and stow it away. Then, Dextre uses the Wire Cutter Tool again to cut the wire securing the safety cap and actuation nut.

Dextre swaps out the Multifunction Tool with the Safety Cap Tool so that it can remove the last cap blocking access to the fuel valve: the safety cap.

The Safety Cap Tool removes the safety cap, and the tool is re-stowed inside RRM. 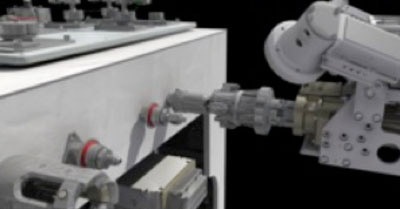 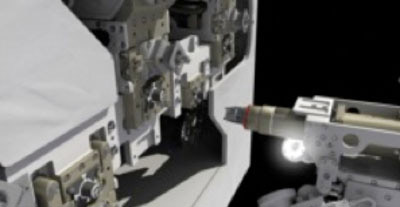 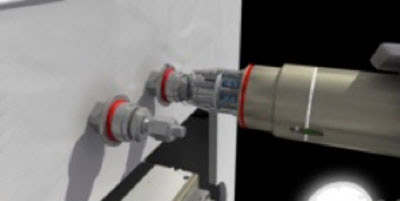 The valve is accessible and the Nozzle Tool can now be connected.

A sequence of commands are sent to RRM that transfer 0.45 gallons (1.7 liters) of ethanol from RRM's fluid transfer system, into the Nozzle Tool and through the attached fuel valve. When the fluid transfer is complete, the Nozzle Tool disconnects from the valve. It leaves behind a "quick disconnect" fitting that provides a secondary seal to the fuel valve. This would allow for a simpler and more efficient refueling connection in the future. 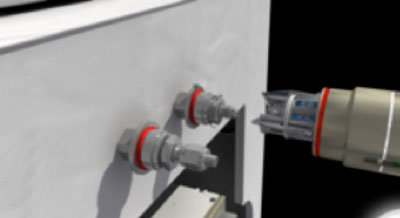 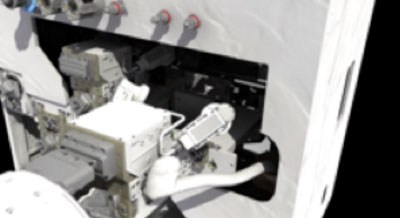 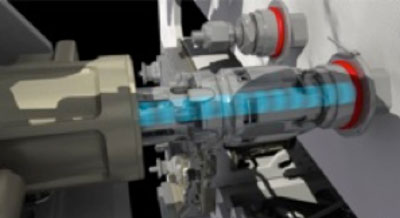 The refueling demonstration is now complete.

Day-by-day updates, videos and images along the way. See the full refueling task in progress →

In orbit at 18,000 miles an hour, day and night change places every 90 minutes. Darkness and light, sleep and wake: it's tough to focus on precise tasks floating outside the International Space Station--but not if you're a robot. RRM puts that proposition to the test, with a first-of-its-kind demonstration of a simulated fuel transfer in space, no human in sight..