On September 6, 2011, mission controllers used the Dextre robot to successfully release the "launch locks" on the four Robotic Refueling Mission (RRM) servicing tools. These locks kept the RRM tools secure within the RRM module during the shuttle Atlantis' flight to the International Space Station.

How Would a Robotic Servicer Deal with Diverse Lighting Conditions on Orbit?

During a Notional Robotic Servicing Mission in space, three unavoidable factors — 1) glaring sunlight 2) light from the servicer spacecraft and 3) looming shadows cast by satellite hardware — could overwhelm a servicer spacecraft's cameras and prevent it from aiding a satellite in need. 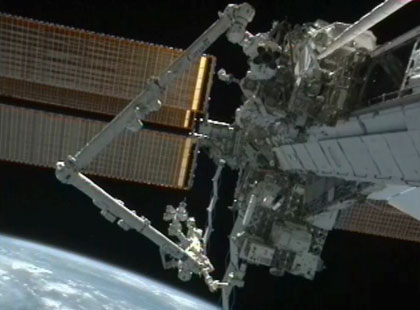 What a servicer spacecraft needs to autonomously capture a satellite are sophisticated machine vision algorithms: computer software that identifies and tracks the natural features of a satellite while factoring out undesirable lighting disturbances. Such a capability is essential to allow for autonomous capture.

To help create algorithms fine-tuned enough to handle such diverse lighting conditions, the team devised the Robotic Refueling Mission (RRM) Vision Task. Conducted on September 7, 2011, the RRM Vision Task consisted of having the Dextre robot's cameras image the satellite parts on the RRM module in different lighting scenarios. Combined with the proper analysis, the Vision Task images provided a wealth of data—information that is being channeled into producing customized machine vision algorithms that can tackle multiple lighting disturbances.

How the Vision Task Works

It takes a mere hour and a half for RRM's home, the International Space Station, to orbit the Earth. Approximately 45 minutes are spent bathed in glaring sunlight; the other 45, in complete darkness. The temperature fluctuations are extreme; the difference in light, extraordinary.

The three images below of the RRM module on the International Space Station demonstrate the stark contrast. Taken as part of the Vision Task on September 7, 2011, while space station orbited the Earth, they were captured by the camera at the end of the Dextre robot's arm. 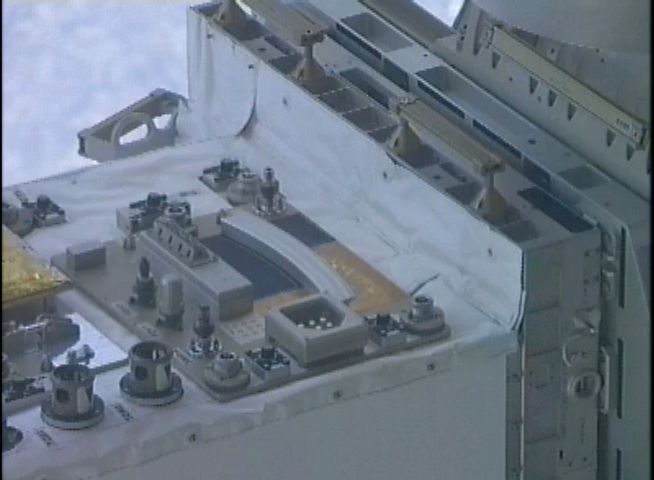 The RRM module cruising in space, safely attached to the ExPRESS Logistics Carrier-4 and bathed in light. The components covering the module are essentially satellite piece parts, some similar to what a robotic servicer may image, identify and track on a satellite.

Zooming in with Dextre's camera (image below), we see a "Marman ring," a part that a servicer satellite could potentially grapple to catch a satellite in need of servicing.

As you can see, the same Marman ring is now enveloped in darkness, the light from Dextre casting a blinding glare and deep shadows onto the hardware.Such contrasting images from the RRM module gave the team precisely the data they need to develop machine vision algorithms that work reliably in space, regardless of the lighting condition. 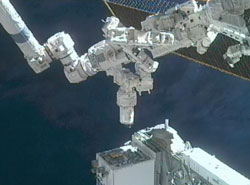 Dextre images the Robotic Refueling Mission during the Vision Task. 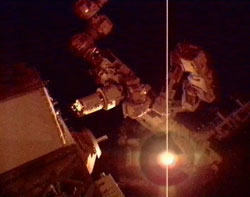 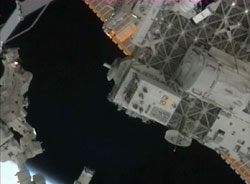 With the Earth in the background, the Dextre robot performs the RRM Launch Lock Release Task.