The RRM Gas Fittings Removal task represents the first use of RRM tools on orbit. During the task, robot operators at NASA's Johnson Space Center remotely control Dextre to retrieve RRM tools and go through the tasks required to remove representative fittings (located on the RRM module) that many spacecraft have for the filling of fluids and gases prior to launch.

During the first part of the Gas Fittings Removal task (May 7-9, 2012), the following tasks take place:

RRM began operations on the ISS with the Canadian Dextre robot and RRM tools, marking important milestones in satellite-servicing technology and the use of the space station robotic capabilities.

A close-up view of the RRM Wire Cutter tool that Dextre uses during the Gas Fittings Removal Task. Credit: NASA


The first day of RRM operations came to a successful conclusion with the achievement of an important milestone: the successful removal and inspection of three RRM tools from their stowage bays within the RRM module. Comprehensive mechanical and electrical "checkouts" of the Safety Cap Tool, the Wire Cutter and Blanket Manipulation Tool, and the Multifunction Tool resulted in a clean bill of health for each satellite-servicing device.

This activity marks the first time that the Canadian Dextre robot has removed an RRM tool from its storage slot. Mission controllers at NASA's Johnson Space Center seamlessly worked together with teams at the Goddard Space Flight Center, the Marshall Space Flight Center, and the Canadian Space Agency's control center in St. Hubert, Quebec to accomplish these important initial tasks.

With the severing of two extremely thin wires, NASA's Robotic Refueling Mission (RRM) and the Canadian Dextre robot heralded a new era in space robotics and fresh advancements in satellite-servicing tools, technologies, and techniques. On the second day of operations on the International Space Station, the RRM team made great strides in proving that remotely controlled robots and specialized tools can successfully perform satellite-servicing tasks requiring extreme precision in space.

Operations began March 8, 2012 with mission controllers directing Dextre to use the RRM Multifunction Tool to remove the launch locks that kept four tool adapters secure in their receptacles during the shuttle launch of RRM to space. This activity marked the first use of RRM tools in orbit.

Once completed, the 12-foot (3.7 meter) Dextre moved on to perform what the most intricate task ever attempted by a space robot: the use of the RRM Wire Cutter Tool to cut two separate "lock wires" 20 thousandths of an inch (0.5 millimeter) in diameter. Deftly maneuvered by mission operators and Dextre, the Wire Cutter Tool smoothly slid its hook under the individual wires and then severed them with only a few millimeters of clearance. Environmental challenges such as dynamic lighting conditions and jitter were overcome to execute these tasks on the first attempt. Such a wire-cutting activity would be a pre-requisite to removing and servicing various satellite parts on future in-orbit servicing missions. 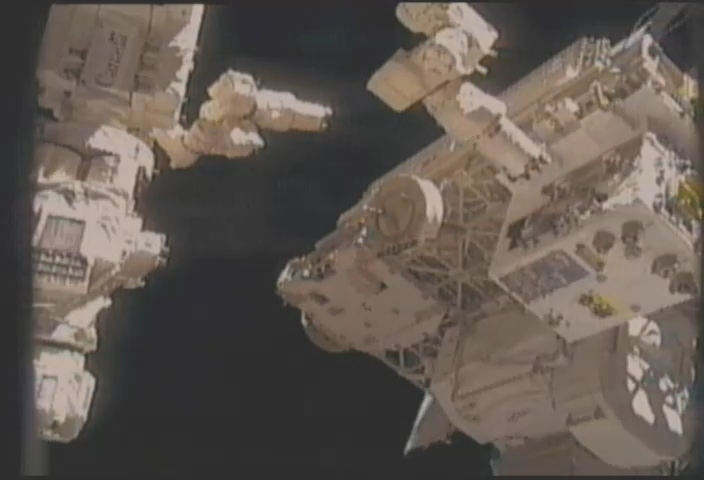 03.07.2012 - The Canadian Dextre robot approaches the RRM module on the International Space Station during the RRM Gas Fittings Removal task. 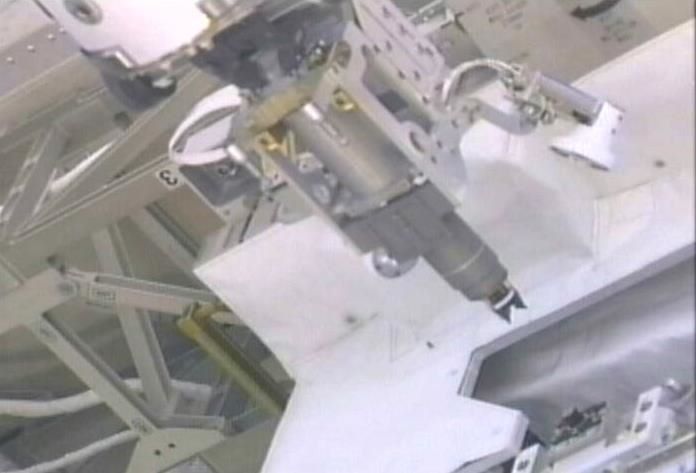 03.07.2012 - The Canadian Dextre removes the RRM Safety Cap Tool from the RRM module during the RRM Gas Fittings Removal task. 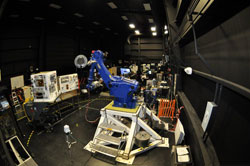 03.08.2012 - Within the Goddard Satellite Servicing Development Facility, a FANUC industrial robot and RRM flight-spare hardwares stand ready to help troubleshoot any problems that might arise. 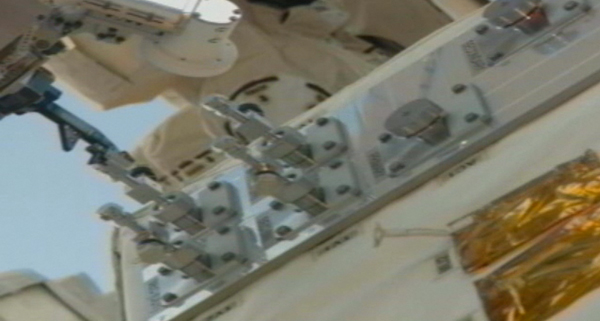 03.08.2012 - Dextre moves the RRM Wire Cutter Tool into place before hooking and cutting the wire between two T-valves. 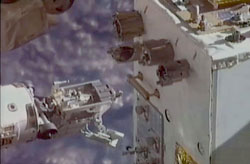 03.08.2012 - With the Earth as its backdrop, the International Space Station's Canadian Dextre robot moves the RRM Multifunction Tool towards the RRM module. 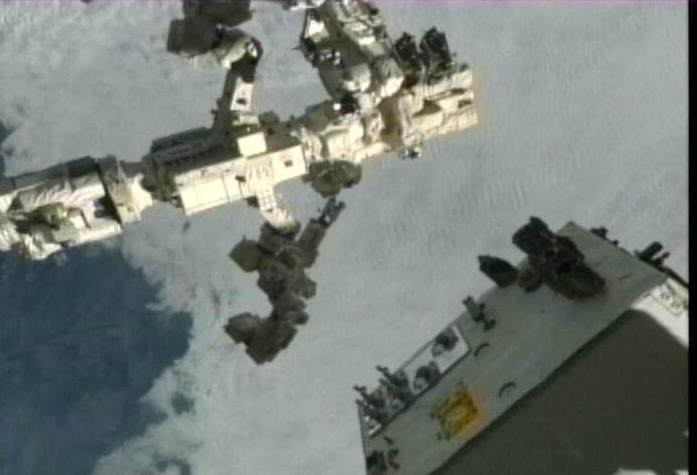 03.09.2012 - Dextre "hangs out" in space with two Robotic Refueling Mission (RRM) tools in its "hands." The RRM module is in the foreground.

A follow-up to the March 2012 Gas Fittings Removal Task Part 1, GFR Part 2 continues to use the Robotic Refueling Mission (RRM) tools - in particular the Multifunction Tool and its corresponding adapters - to demonstrate how a space robot could remove and manipulate representative fittings and interfaces on many satellites for the filling of fluids before launch. At the completion of these operations, the RRM team looks forward to its next set of on-orbit operations: the highly anticipated Refueling demonstration tentatively scheduled for late summer 2012.

RRM Multifunction Tool (MFT) is the star of the June 2012 RRM operations. The "MFT" is designed to connect to a variety of specialized adapters to perform a wide range of servicing tasks on the RRM module. [More on the Multifunction Tool]

The following GFR Part 2 activities took place on the International Space Station from June 19 to 22, 2012:

First, mission operators use the Canadian Dextre robot to equip the RRM Multifunction Tool with the T-valve Adapter. The Multifunction Tool then proceeds to remove and stow a T-valve - the same one had its wire cut by the RRM Wire Cutting Tool in March 2012.

With this task complete, Dextre then switches the adapters on the RRM Multifunction Tool so the tool can remove and stow an ambient cap. This is the same famous cap that was featured during the March 2012 operations, when Dextre and the RRM Wire Cutting Tool expertly snipped the two twisted wires - the thickness of a mere four sheets of paper - that closely hugged the cap.

Next, Dextre moves on to connect a third adapter to the RRM Multifunction Tool so that it can manipulate a plug that lies beneath the ambient cap.

Finally, Dextre uses the RRM Multifunction Tool to pick-up the Tertiary Cap Adapter. On many satellites, tertiary caps are the outermost layer of the hardware sealing access to a satellite's fuel line. Having this adapter in hand allows the RRM team to be one step ahead when they start the Refueling demonstration, tentatively set for late summer 2012. [Learn more about Tools]

By the end of their first day back on the job, RRM and Dextre had successfully used the Multifunction Tool to remove and stow a T-valve, the first of four main tasks on the docket for Part 2 of the Gas Fittings Removal Task. The Ambient Cap Adapter is now in place at the end of the Multifunction Tool, ready to complete the next round of operations on the International Space Station.

The RRM and Dextre duo made history in March when Dextre severed two extremely thin wires (the thickness of four sheets of paper) with only a few millimeters of clearance on the ambient cap — the most precise task performed by a robot in space to date. During the second day of RRM operations, Dextre will use the RRM Multifunction Tool with its corresponding Ambient Cap Adapter to remove and stow an ambient cap — a piece of hardware that would cover important fluid and gas lines on a real satellite. Mission operators will also use the Multifunction Tool to remove and manipulate a plug (located under the ambient cap) on the RRM module. Stay tuned for the next update!


06.20.2012 - RRM operations begin again on the International Space Station. During the second part of the Gas Fittings Removal task, the Canadian Dextre robot (bottom) performs a new set of satellite-servicing tasks on the RRM module (center).

06.20.2012 - The RRM Multifunction Tool (left), built at NASA's Goddard Space Flight Center, approaches the T-Valve Adapter (bottom right) on the RRM module. The Multifunction Tool will use this adapter to pick up a T-Valve, a part found on many satellites.

06.20.2012 - The Multifunction Tool with its T-Valve Adapter closes in to retrieve the T-Valve on the RRM module. By demonstrating these types of tasks, RRM is laying the foundation for robotic satellite servicing on orbit.

The Multifunction Tool, or "MFT," was designed to be compact and multipurpose so that it can deliver smart and cost-effective servicing options in space. To date, Dextre and MFT have picked up three different adapters to remove and manipulate representative satellite hardware on the RRM module. Now that these activities have been successfully completed, the RRM team will use the last day of operations to manipulate a plug and prepare for the namesake Refueling task. Stay tuned for the next update!

une RRM operations have successfully concluded, thanks to the excellent work of the teams at NASA's Goddard Space Flight Center, the Canadian Space Agency, and NASA's Johnson Space Center. RRM is now ready to practice and test the task of on-orbit refueling — a capability that would keep on-orbit satellites operating longer and more cost-efficiently in space.

During the last day of operations, Dextre and the Multifunction Tool used the Plug Manipulation Adapter to — you guess it — manipulate a plug that was located under the ambient cap on the RRM module. Next, Dextre and the Multifunction Tool picked up the Tertiary Cap Adapter, the last task assigned to the Multifunction Tool for this set of operations. Dextre safely stowed the Tool and the connected adapter so that when RRM operations begin again, the pair can remove a tertiary cap — an early step to demonstrating fluid transfer on the RRM module. Dextre also checked out the lights on the RRM Nozzle tools in preparation for the upcoming Refueling task. Prepared to make robotic history yet again, RRM and Dextre are tentatively scheduled to begin the highly anticipated Refueling demonstration later this summer.

06.22.2012 - The Multifunction Tool uses its attached adapter to manipulate a plug located under the Ambient Cap on the RRM module.

06.22.2012 - Dextre and the Multifunction Tool carefully position the Tertiary Cap Adapter over the Tertiary Cap Receptacle on the RRM module - a practice run for the upcoming RRM Refueling task.