Batten down the hatches!

Just like a ship, the International Space Station is carrying precious lives and cargo through an unforgiving environment - and its operators want to make sure that its critical resources, like the ammonia that helps keep the station's cooling system working properly, do not escape into space. NASA's Robotic External Leak Locator (RELL) is a robotic, remote-controlled tool that helps mission operators detect the location of an external leak and rapidly confirm a successful repair. With RELL added to their tool chest, the space station team has another helper in their quest to keep the orbiting research center and all its onboard experiments operating at the right temperatures. 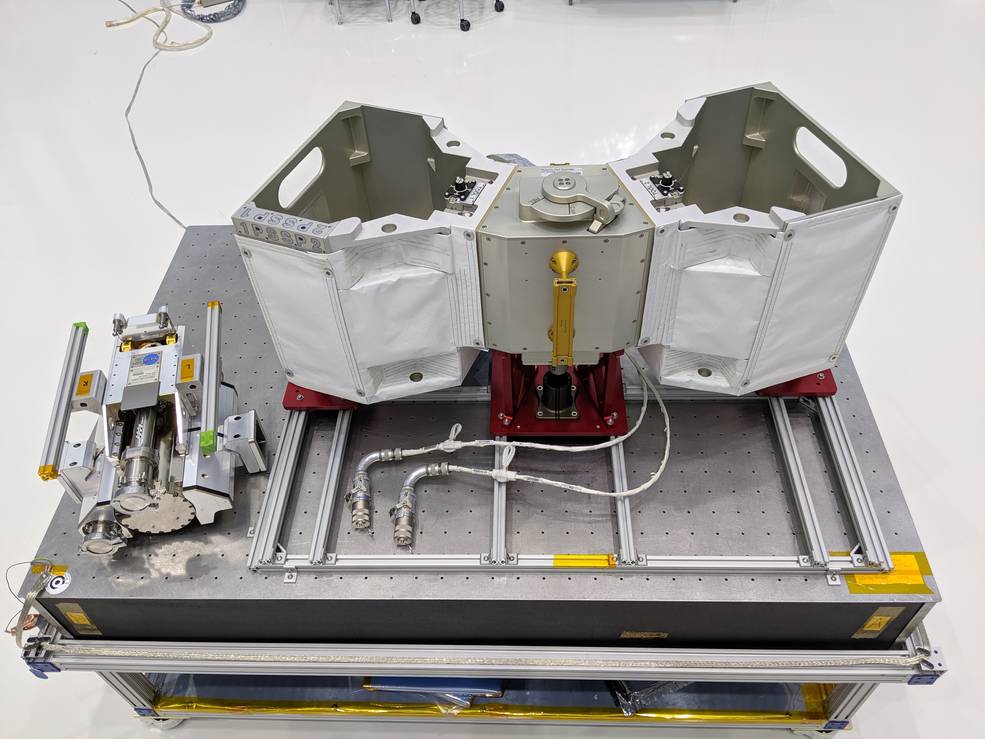 NASA Launching RiTS, a ‘Robot Hotel’ to the ISS 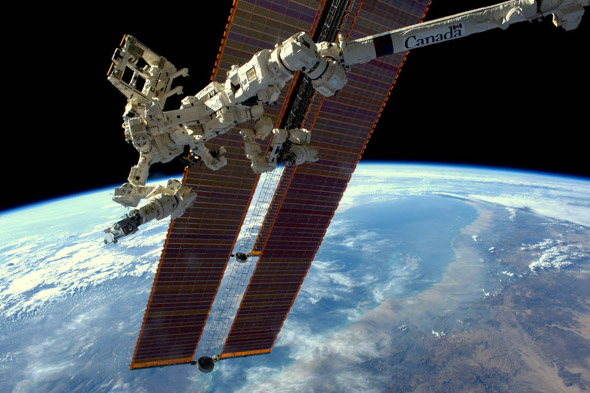 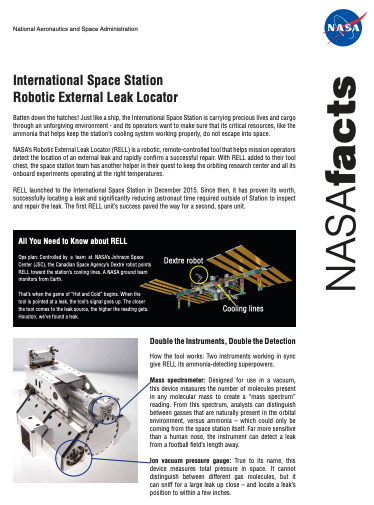 Just as coolant in your car is used to cool its engine, ammonia is circulated through a huge system of pumps, reservoirs and radiators on the space station to cool all of its complex life support systems, spacecraft equipment and science experiments. This coolant system contains thousands of feet of tubing and hundreds of joints. Throughout its lifetime, this system has experienced tens of thousands of thermal cycles orbiting through night and day and the normal wear and tear that comes with over a decade in service. The space station also has to contend with micrometeoroids: tiny objects whizzing through space at speeds that can easily exceed 20,000 miles per hour - and that can cause unwanted, microscopic holes in spacecraft equipment.

Over time, there have been intermittent component failures and leaks on the ammonia cooling loop. Astronauts have undertaken spacewalks to help diagnose, troubleshoot and replace components within the complex active thermal control system. Without a way to robotically locate leaks with high accuracy, astronauts have used spacewalk time to inspect and isolate a potential leak site before addressing the problem at hand. 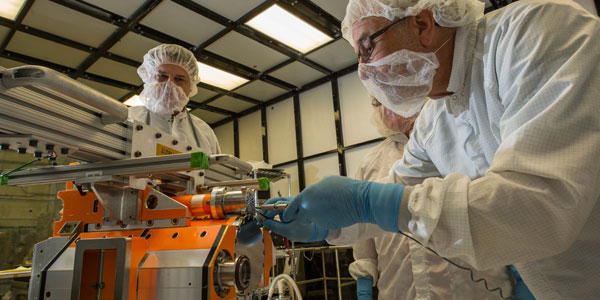 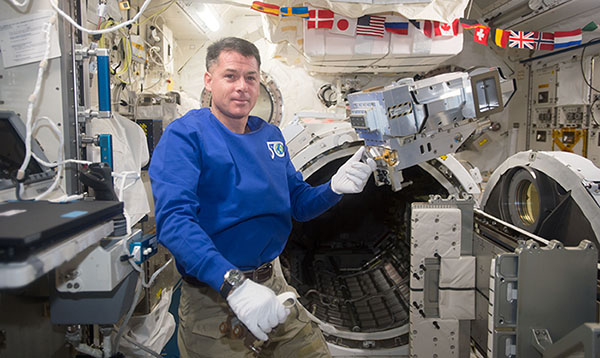 RELL is stored until an ammonia leak is detected. Then, a game of “hot and cold” would begin. Affixed to the Canadian Space Agency’s Dextre robot arm, RELL would be moved around the outside of Station using its mass spectrometer “sniffer” to locate ammonia leaks. When RELL is directed toward a leak, it returns a higher signal. The higher the signal, the closer the leak. This process allows RELL to pinpoint the source of any given ammonia leak, giving Station managers the information they need to understand and correct the problem.

Before RELL, astronauts manually searched for leaks on spacewalks, which always carry an element of risk due to the nature of spacewalks.

Two instruments working in sync give the RELL its ammonia-detecting superpowers:

Designed for use in a vacuum, this device measures the number of molecules present in any molecular mass to create a "mass spectrum" reading. From this spectrum, analysts can distinguish between gasses that are naturally present in the orbital environment, versus ammonia - which could only be coming from the space station itself. Far more sensitive than a human nose, the instrument can detect a leak from a football field's length away.

True to its name, this device measures total pressure in space. It cannot distinguish between different gas molecules, but it can sniff for a large leak up close- and locate a leak's position to within a few inches.

The RELL So Nice, They Got It Twice

RELL launched to the International Space Station on December 3, 2015. Since then, it has proven its worth, successfully locating a leak and significantly reducing astronaut time required outside of Station to inspect and repair the leak.

Because RELL was built inexpensively, the electronics are commercial off-the-shelf and could be affected by the radiation environment in space, so Space Station always planned to request a spare. The first RELL unit’s success paved the way for a second, spare unit.

Both RELL units will be stored in Robotic Tool Stowage, or RiTS, an aluminum tool shed. Once installed to the outside of station, RiTS will store the instruments so they are available when needed to track down a leak. 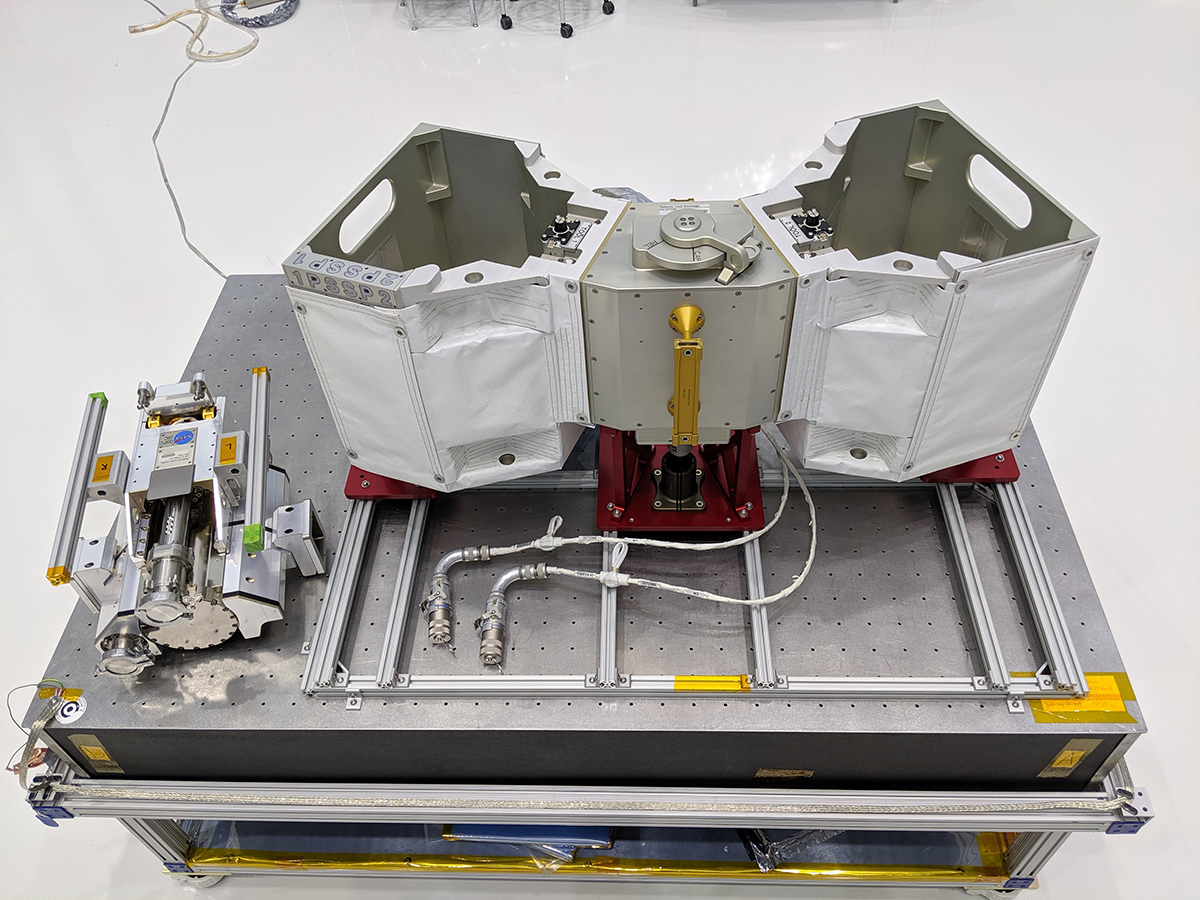 
With two RELLs on station, it was time for them to move to their very own storage unit. RiTS is an aluminum housing, like a tool shed, that has the ability to store RELL units outside of station. It provides heat and physical protection from radiation and micrometeroids, or tiny, high-speed objects hurtling in space. RiTS also has robot-friendly interfaces to allow Dextre to remotely grab and safely return a RELL to its stowage bay.

Storing RELL externally not only frees up space on board that could be used for other scientific hardware and experiments, but also allows for the important instruments to be deployed more quickly, easily, and efficiently. 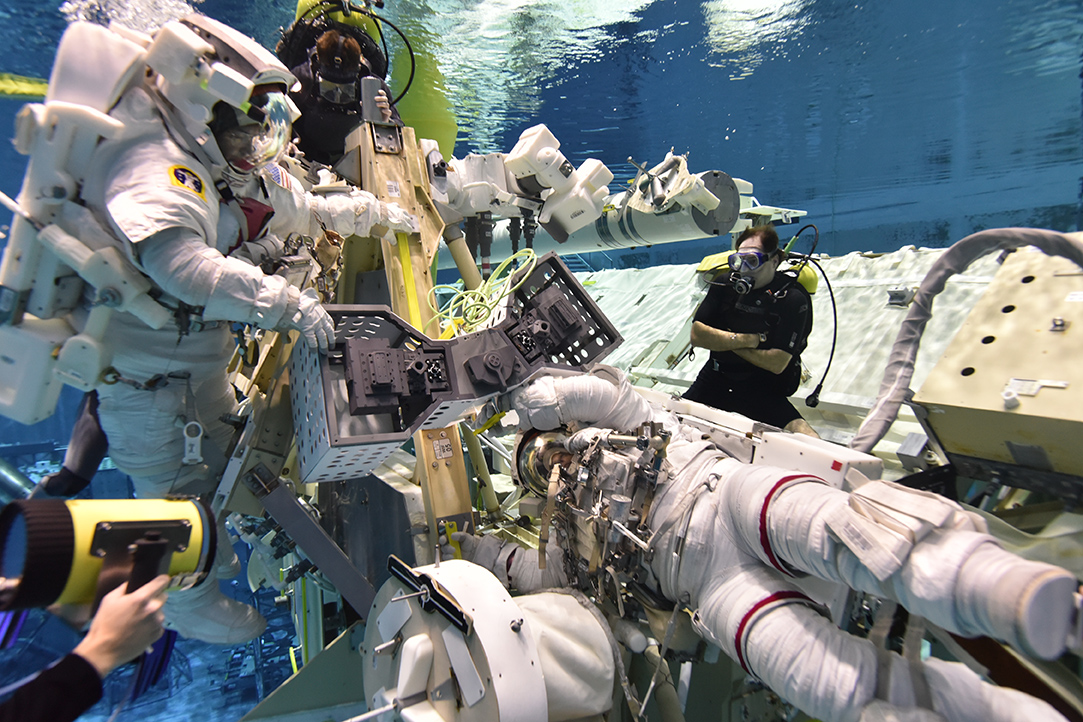 Currently, the process of deploying RELL depends on airlock and crew schedule availability, and after being deployed by station’s Dextre robot, there is a 12 hour wait in space before it can be used. This time allows for RELL’s extremely sensitive gas analyzer to clear itself of water vapor and other gasses from inside the station, essentially giving the instruments a clean slate. It could take multiple weeks or even months from the time a leak is suspected to the time RELL is deployed to find out where it is coming from.

With RiTS’ external stowage capabilities, this entire process only depends on Dextre’s availability, greatly expediting the search for leaks.

RiTS was developed in partnership with NASA Johnson Space Center, and launched on Dec. 5, 2019 aboard the 19th SpaceX commercial resupply mission. Eventually, it will be installed as a permanent fixture on the International Space Station via astronaut spacewalk, pending spacewalk schedule availability.

The benefits of leak detection have already been proven on Station, and this ability could be similarly helpful for long-term human habitation on the lunar Gateway, a lunar habitat, and perhaps one day a crewed voyage to Mars. Furthermore, at their core, RELL is a robotics-controlled characterizer of the local environment. This same ability could be used to determine the composition of nearby environments for exploration on the lunar surface, and for scientific and resource utilization purposes.

A Tale of Two Centers

Working together, the Engineering Directorate at JSC and the Satellite Servicing Projects Division (SSPD) at NASA's Goddard Space Flight Center (GSFC) developed RELL for the ISS Program so that astronauts could dedicate their resources to other duties.

The Johnson Space Center (JSC) Engineering Directorate houses many of the space station subsystem managers that are responsible for keeping the immense, orbiting research asset operating safely and reliably for global use. With a wide array of technology development experts, designers, analysts, project engineers and project managers in house that have developed ISS systems and supporting hardware, the Engineering Directorate seeks to support the ISS program by providing solutions like RELL that can enhance the ISS mission and systems reliability.

The team is driving the cutting edge in new NASA servicing technologies. In creating RELL, SSPD leveraged the experience they gained building and executing the Robotic Refueling Mission (RRM), an experiment on space station that is successfully demonstrating tools, technologies and techniques to service spacecraft that were not designed for in-flight repair.

Have a media query?