Robotically refueling a satellite in space: Easy or Hard?

Millions of cars are refueled each day. How difficult could it be for a robot to fill up a satellite?


The truth is, it's extremely hard. The challenges are stacked as the robot has to deal with uncooperative, triple sealed fuel caps, floating hoses, and extremely corrosive satellite fuel contained under intense pressures—all handled in the weightlessness of space. Not to mention that the robot servicer and the client are both 22,000 miles above our heads—far away from their human operators.

The solution? A comprehensive suite of new robotic technologies and procedures to overcome each obstacle. The team at Goddard is working with Kennedy Space Center as an integrated team to develop, test and build a flexible hose, new fueling tools, and propellant transfer system that meet mission requirements. 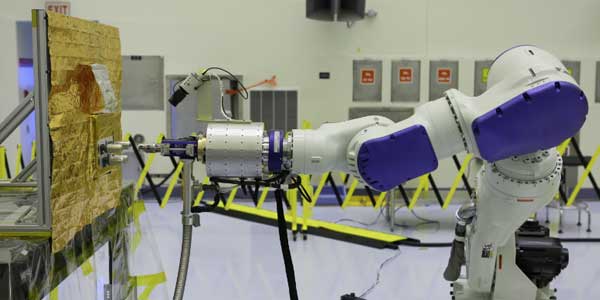 The Robotic Refueling Mission, RRM showed in January 2013 that remotely controlled robots can work through the caps and wires on a satellite fuel valve and transfer fluid into existent, orbiting spacecraft that were not designed to be serviced. RRM was the important first step—but doing more was always part of the long-term plan.

To meet safety regulations on space station, RRM transferred liquid ethanol - a safe substitute for satellite fuel. One year later in February 2014, a new set of advanced technologies were tested with real satellite propellant. They're doing this via RROxiTT: the Remote Robotic Oxidizer Transfer Test.

RROxiTT is a multi-Center, remotely controlled test of new technologies that would empower future space robots to transfer hazardous and corrosive satellite oxidizer into the propellant tanks of spacecraft in space today. The test is being conducted on the ground at both NASA Goddard Space Flight Center and Kennedy Space Center. To simulate mission conditions, the oxidizer is being transferred at flight-like pressures and flow rates.

Here on earth, RROxiTT technologies could one day be applied to robotically fill up satellites before they launch, keeping humans at a safe distance during an extremely hazardous operation.

By executing RROxiTT, invaluable data is gained about the performance of their new propellant transfer technologies and the telerobotic operational procedures developed to date. Results will help the team to resolve discovered anomalies and advance the system in preparation for flight.

With RROxiTT off their checklist, the team focuses on advancing additional technologies to transfer other hazardous propellants commonly used by satellites, such as Xenon used in solar electric propulsion systems. 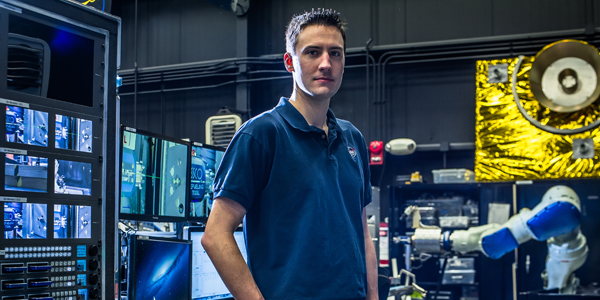 When RRM operated on the International Space Station, the Dextre robot's human controllers were on the ground at Johnson Space Center.

When Alex Janas, lead roboticist for the RROxiTT demonstration, steps up to his console at Goddard in Maryland to drive the RROxiTT robot, he is not going to have a robot, tool or a propellant pump in sight. Every other piece of hardware for the test is located about 800 miles away at the Payload Hazardous Servicing Facility at KSC in Florida. With the cameras on the robot to guide him and supported by innovative software, Janas is using a joystick and keyboard to connect the robot's tool to the satellite valve so the oxidizer transfer can take place.

Why does the team test hardware and procedures this way? Because it mimics what they would encounter during a real robotic servicing in space. The robotic operator would be on the ground, far away from the client that his or her robot is servicing.

Consisting of oxidizer tanks, seal-less pumps, flow-metering devices, and a maze of tubing , the PTS contains the technologies a servicer satellite would need to replenish the propellant of orbiting spacecraft for many years and many missions. 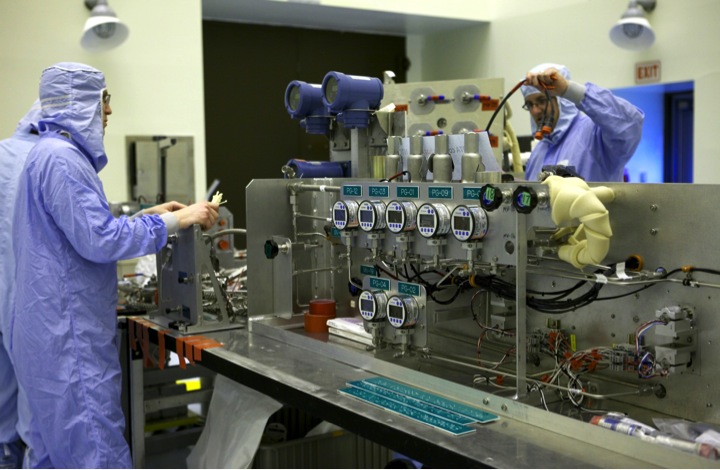 It also contains an adjustable, deployable-length hose delivery system. Roughly the size of a roll of quarters, the PTS pump is designed to deliver the oxidizer at high pressure and at flow rates required for bubble-free formation in the individual client tank — an extremely important factor for client propulsion system performance. The system uses very little power, a precious commodity in space flight. An innovative metering system ensures that the PTS dispenses hypergolic propellants in accurate and precise amounts.

What exactly are hypergolics? "Hypergolic propellants are fuels and oxidizers which ignite on contact with each other and need no ignition source."

This system was developed and tested with hypergolics by Kennedy Space Center team members.

The hose is the essential link between the Propellant Transfer System and the Oxidizer Nozzle Tool during transfer. Developed by Kennedy Space Center, the device is flexible enough to be robotically maneuvered, yet tough enough to handle corrosive satellite propellant at flight pressures. It has a multi-layered wrapping and a suite of heaters to ensure that the propellant and Hose components work properly in the harsh environment of space. 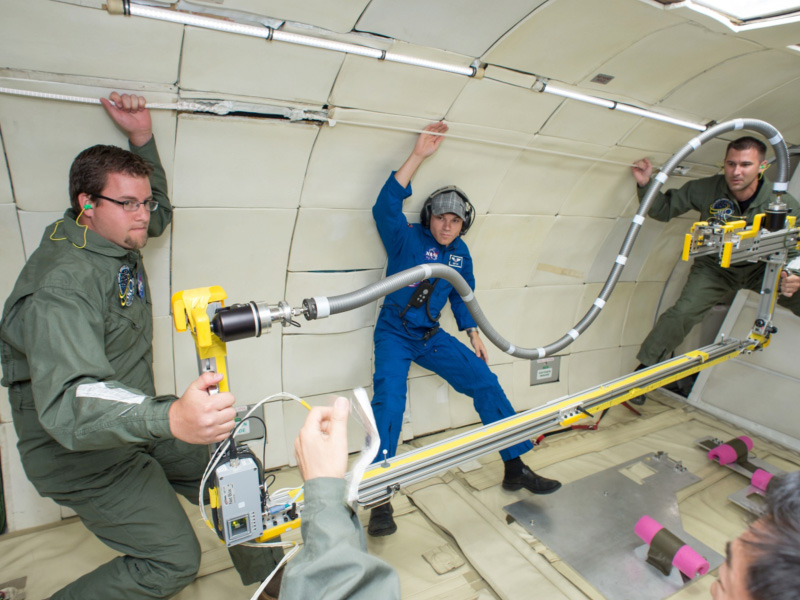 Jun 4, 2013 - Two assistants help during flexible host testing conducted June 4-6, 2013 on a zero-gravity airplane. Data collected during the series of 20-second tests in microgravity helps design a host that is maneuverable yet strong enough to transfer corrosive satellite fuel on orbit. 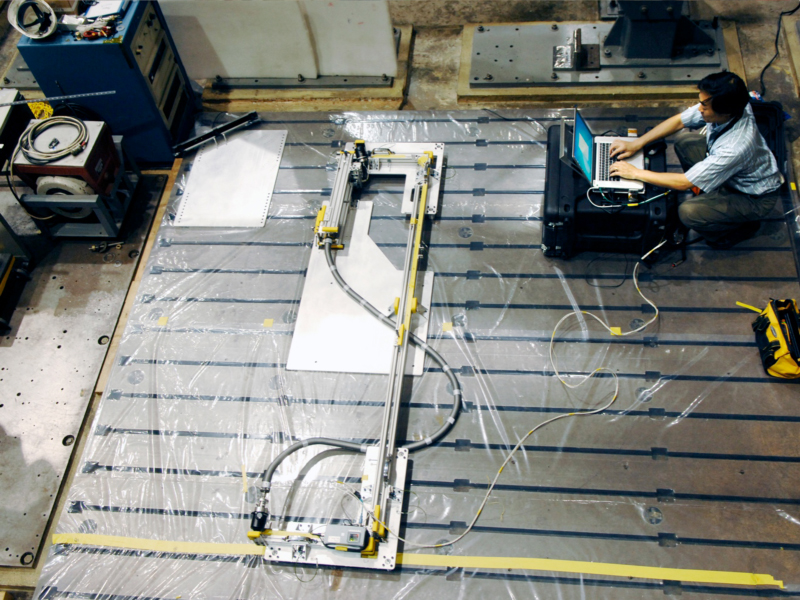 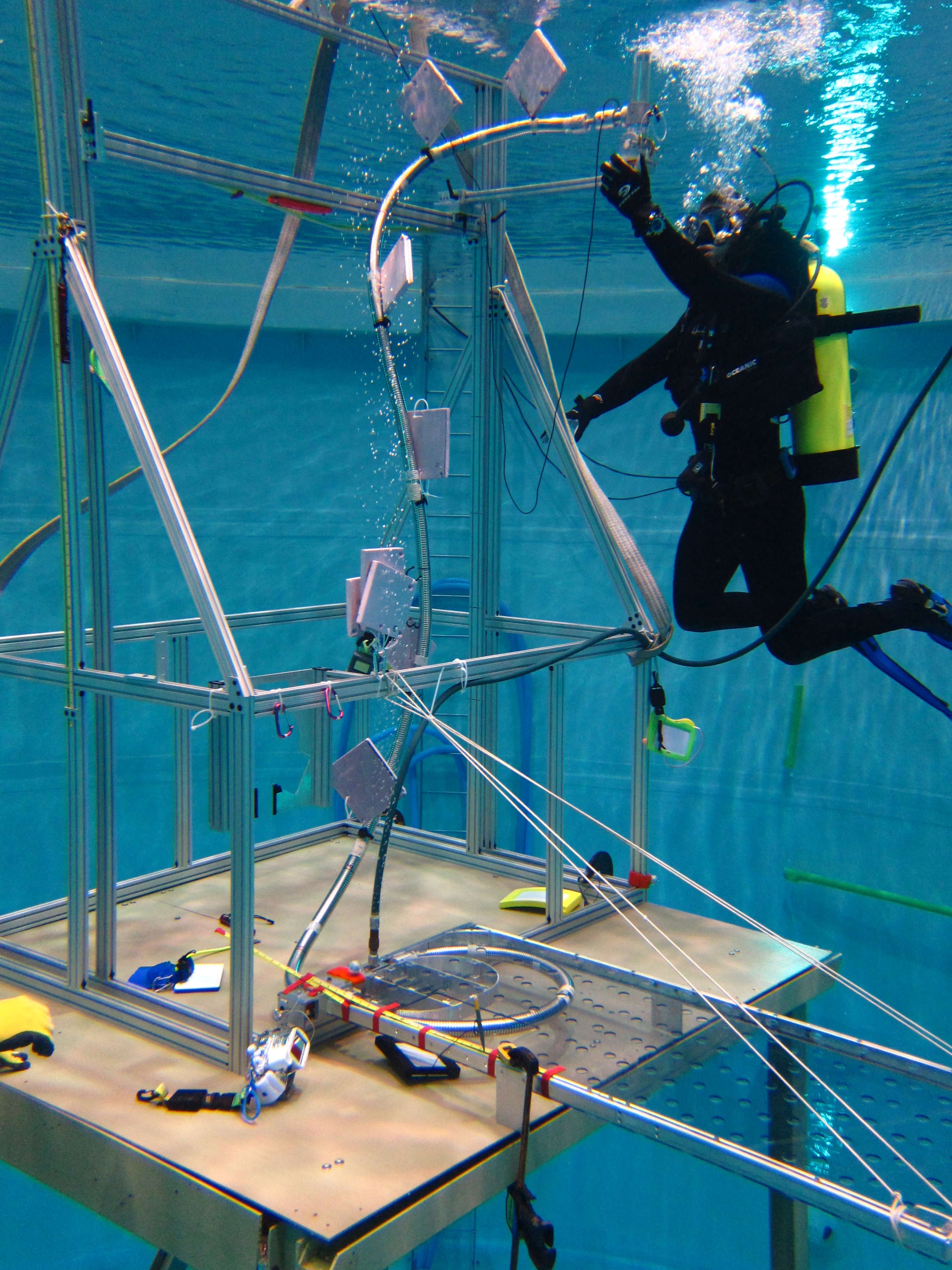 Feb. 8, 2014 - Team members took a swim the first week of February 2013 at the University of Maryland's Neutral Buoyancy Research Facility to study the behavior of a flexible hose in a watery environment - a state that closely mimics the zero-gravity dynamics of space. Data gathered from this engineering evaluation helps shape designs for a unique hose that could be used to transfer fuel to a satellite in space.

Designed by the same team that built the tools for the Hubble Space Telescope Servicing Missions and the Robotic Refueling Mission, the Oxidizer Nozzle Tool is built to connect to - and seal against - a satellite valve that wasn't originally designed to be accessed on orbit.

The ONT uses a Quick Disconnect adapter to seal to the satellite valve and operate the valve to permit propellant transfer. Once the Tool is in place and the satellite valve is open, the Propellant Transfer system kicks into gear to transfer the oxidizer through the valve. The ONT draws from lessons the team learned building and testing the Robotic Refueling Mission Nozzle Tool. 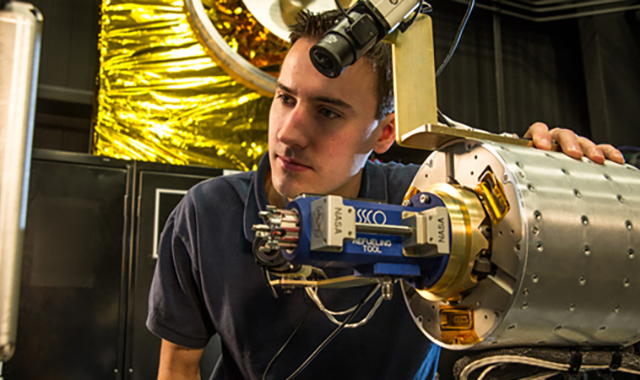 RROxiTT lead roboticist Alex Janas stands with the Oxidizer Nozzle Tool
as he examines the worksite.

What makes oxidizer so dangerous?

Oxidizer -- namely nitrogen tetroxide -- is a chemical that, when mixed with satellite fuel, causes instant combustion that provides thrust (motion) for a satellite. Oxidizer is contained within a satellite tank at intense pressures, up to 300 pounds per square inch (about 20 times atmospheric pressure). Toxic, extremely corrosive and compressed, it requires special handling and a unique set of technologies to transfer it.