Robots are poised to make what was once thought to be impossible in space a reality. From extending the lifespan of satellites, to assembling massive life-seeking telescopes in space, to refueling and repairing spacecraft on journeys to distant locations, the possibilities are endless. Key to these endeavors is demonstrating the foundational capabilities – servicing, assembly, and manufacturing.

Servicing covers a wide range of activities spanning fixing, improving, and reviving satellites and refers to any work to refuel, repair, replace or augment an existing asset in space. Servicing allows for satellite life-extension and upgradability as technology evolves on Earth.

The most mature and robust of the ISAM capabilities, servicing is the conduit through which NASA will end the era of one-and-done spacecraft, which dictates satellites are designed to live their lives alone.

Assembly is the practice of gathering two or more parts together in space into a single, functional aggregate structure. A suite of assembly capabilities allows us to launch individual parts to space separately and bring them together, thereby overcoming the constraints of rocket fairing volume limitations.

The ability to launch individual components of a large structure and robotically assemble them in space makes various seemingly impossible concepts possible. This capability allows for assembly of habitats in places further away than low-Earth orbit, and opens up the door for constructing large telescopes and other platforms that would otherwise be impossible.

Manufacturing is the fabrication of components in space as the need arises. This capability allows for greater adaptability in dealing with unforeseen challenges and has the potential to eliminate the need to launch as many components (including contingency components) upfront. It also allows for the production of unprecedented monolithic structures, such as jointless thirty-meter truss beams. On-orbit coating applications and nano-manufacturing allows for surface coatings to be applied or renewed to recover optical and thermal properties.

Starshades are large, deployable structures that can help in the search for life on planets outside our Solar System

launch the components of a large, deep-space telescope separately and assemble them in space can break the current constraint of telescopes needing to be small enough to fit on a single launch vehicle. Technologies demonstrated by ISAM are laying the groundwork for in-space assembled observatories to peer deeper into our universe and possibly find life beyond Earth.

Starshades are large, deployable structures that can help in the search for life on planets outside our Solar System. Earth-like planets orbiting a star are about 10 billion times fainter than their star, making them difficult to see. Starshades flown between a space telescope and a star could block out a star's light to reveal any planets for direct imaging. Large quantities of fuel are required for continuous thrust to maintain the starshade's proper position, so the ability to refuel is a critical aspect of concept feasibility.

On-orbit Assembly, and Manufacturing can be used to contruct truss structures in space, thereby enabling persistent orbital platforms which can be repeatedly reconfigured and renewed. Persistent platforms can efficiently host short-term technology demonstration payloads launched without dedicated spacecraft. The payloads rely on the platform for all engineering resources, including removal and disposal at the end of the demonstration, freeing up the position for the next payload.

The basic formula for sustainable space exploration is: consumable replenishment and component repair (servicing), construction of large and precise structures (assembly), and creation of components from feedstock or in-situ resources (manufacturing) to break the dependence on earth supply chain logistics.

ISAM capabilities are critical to developing sustainable space architectures that allow spacecraft to live longer and journey farther, as well enabling a sustained human presence in space. Robotic ISAM technologies facilitate the replenishment of supplies that run out from spacecraft fuel, to coolant, to oxygen. They can help in ensuring the longevity and operability of spacecraft and life support systems with unplanned repair and planned maintenance.


The ISAM State of Play document is a survey of ISAM capability across industry and government agencies. It was produced to promote awareness of the breadth of ISAM investments and demonstrated capability across the aerospace community, with the hope of fostering dialog, partnerships, and innovation. The ISAM State of Play can inform architecture studies, mission formulation, and pathfinding options to establish an economic ISAM ecosystem.

This is the initial release of the ISAM State of Play produced in October 2021 based on a web-based search of public information available online. As such, it is not considered an exhaustive inventory of ISAM capability, as it does not yet include a complete record of NASA’s ISAM achievements. For example, the following ISAM demonstrations on the International Space Station (ISS) will be incorporated in the next version, with an explanation of how these capabilities can be adapted for other mission scenarios:

We invite comments, corrections, and additions to this document via the feedback link on Page 6. That feedback will be incorporated in a new edition that is more accurate and comprehensive. 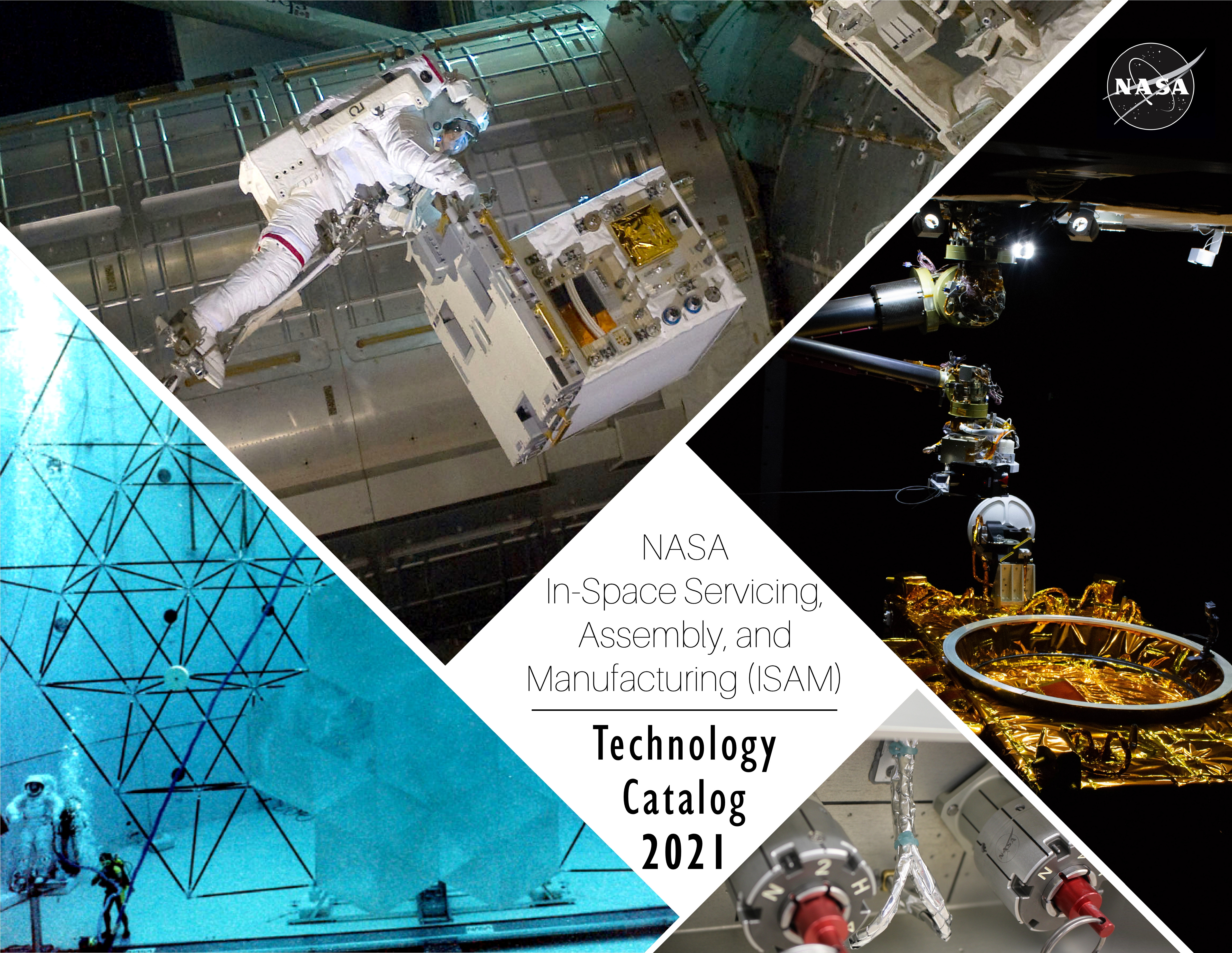 NASA's Technology Transfer Program ensures that innovations developed for exploration and discovery are broadly available to the public, maximizing the benefit to the Nation. Whether you're looking to start a new company, enhance an existing product, or create a new product line, you can gain a competitive edge in the marketplace by putting NASA technology to work for you.

The ISAM Technology Catalog provides domestic companies with insight and access to technology NASA has developed in support of spaceflight missions, technology demonstration, or in pursuit of concept development. By transferring technology as it is developed rather than only after it has been demonstrated in orbit, NASA expedites new capabilities into the commercial market and promotes U.S. global leadership in ISAM capability. Organizations interested in commercializing ISAM technologies are invited to contact the points of contact listed in the catalog to discuss how they can be adapted for other spaceflight and surface applications.

The full version of the ISAM Technology Catalog is available to domestic companies by contacting Patty Manalansan at NASA Goddard Space Flight Center, which controls the release of the catalog. An NDA is required as the catalog contains export controlled technical data.

Envisioning our Future in Space

NASA is hosting its yearly ISAM Workshop, October 17-18 at Goddard Space Flight Center in Greenbelt, Maryland. Interested companies and workshop attendees will hear about upcoming ISAM missions, opportunities to collaborate on ISAM technologies and capabilities, and the importance of ISAM services to government agencies, including NASA and the Department of Defense.